Farhan Kathawala
Nov 10, 2020 5 min read Programming, React-Native, Mobile App Development
tl;dr I wrote a library that takes care of this whole process with one function call. It works with both managed Expo apps and regular React Native apps, you can see a demo below and installation instructions here: expo-file-dl

This is the functionality we’re trying to achieve. All the code for this demo is available in the expo-file-dl and expo-file-dl-example repos.

When looking through the plethora of Expo libraries, it’s often difficult to find exactly the ones you need. To save a file to a folder on the device’s internal storage, one might think that the downloadAsync function from expo-file-system would do the trick, it even let’s you specify the name of the local file you wish to download the content to!

But alas, this isn’t the full answer. Expo apps, like most mobile apps have a file storage that’s wholly their own and difficult to access from, say, a file manager app (think Amaze File Manager) or a media library app (think Google Photos). And it’s that inaccesible storage where downloadAsync stores your files. To save a file on a publicly accessible folder in the device’s internal storage, you need to do a bit more.

After you’ve done that we can proceed.

A bit hidden in the Expo FileSystem docs is this note

Each app only has read and write access to locations under the following directories: FileSystem.documentDirectory and FileSystem.cacheDirectory

The former is more permanent, so when creating our file path to download the remote content to, we use that one.

After this code executes, we’ll have the content downloaded into a folder only our app has access to. Next, we’ll transfer this file to a publicly accessible folder. But it’s not as simple as mv dir1/file1 dir2/!

Moving the file to a publicly accessible folder

The process described below for Android will also work on iOS devices, but it will only work if the file being downloaded is an image file (.jpg, .png, .heic, etc.)

The best way is to use the expo-sharing library ( docs), which exposes different ways of dealing with different types of files.

iOS has a concept called “Universal Type Identifiers”, which are special tags attached to files to tell the OS what can be done with said files. So, for example, a file with a UTI of “public.video” can be opened by any video player app on iOS. You can tag files with a UTI of your choosing. The UTI “public.item” is a generic type that tells iOS that the file is some type of file, which can be saved to the user’s filesystem. It doesn’t tell iOS that the file can be opened in any media players or anything like this, so we’ll use the “public.item” UTI to tag the file when we expose a way of dealing with the file to iOS.

With all this in mind, here’s how we’ll handle non-image file downloads on iOS:

The above will open a prompt to the user after any non-image file has downloaded. The prompt will ask the user what the user would like to do with the file. At that time the user has the option to select “Save to Files”. If this is chosen, the file will be visible in the user’s Files app.

To move a file from the app-controlled FileSystem.documentDirectory to a publically accessible folder, you’ll need to do the following:

Here’s the code to do that

That’s it. Now you should see your file in the ‘Download’ folder on the device.

But this only takes care of downloading the files. Anyone using your app won’t have any idea if the download started, if it failed, or if it’s still ongoing. To notify app users about the download status of the file, take a look at the expo-file-dl library, which implements download status notifications as an optional feature. 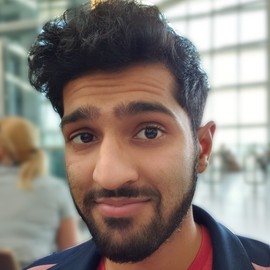 A happy full stack developer sharing tidbits of everything and anything web / mobile app dev.